Tuesday will be an abnormal day in the history of the IPO. “While I appreciate that this path makes sense for most, Spotify has never been a normal kind of company.”

On Tuesday, Ek’s Spotify will pioneer a new way for companies to go public, volunteering itself as a guinea pig for the venture-backed economy by eschewing the traditional help of investment bankers.

Rather than selling shares to institutional investors in advance of the first day of trading — as is normally done in an IPO — Spotify isn’t selling any new shares. It is instead allowing its existing shareholders to directly offer their holdings to the market.

Here’s why that matters — even if you don’t care about Spotify: If the direct listing is successful, then the push-and-pull power struggle between Silicon Valley and Wall Street would shift more toward the former.

More and more highly valued startups could think that they, too, do not need Wall Street’s usual fare in order to become a public company, and investment bankers could have a tougher time pitching their services to CEOs.

Starry-eyed entrepreneurs and deal-chasing bankers are cut from culturally different cloths, but they’ve needed each other for decades: Founders need the wisdom of bankers to turn their private companies into public behemoths; bankers need the consistent revenue stream.

It’s a professional alliance that has worked, and that’s probably why there hasn’t been that much innovation in the IPO process despite the tech sector’s love of disrupting the old business model.

So, what if founders are no longer dependent on bankers’ full suite of services to go public?

How Does A Direct Listing Work?

That’s what Spotify is testing.

It’s not as though bankers are totally cut out of the process. They’ll still make tens of millions of dollars in advisory fees for what is, in some ways, a more challenging task.

Morgan Stanley, for instance, reached out to almost all Spotify shareholders over the last month or so to gauge their interest in selling stock, according to people familiar with the process, and more recently began the same conversations with institutions interested in buying Spotify shares.

That work theoretically will help Spotify know what will happen to the company’s stock at various price levels.

The other objective of bankers advising the deal, the people say, is to make sure there is a high-enough volume of shares traded to insulate the company against extreme volatility. Because Spotify isn’t being expertly “priced” the day before trading, its shares could move around wildly in the opening hours of trading — which is expected to begin midday on Tuesday.

One reason that banks like Morgan Stanley have their work cut out for them: Spotify investors and employees have had tons of opportunities over the last decade to sell their stock. 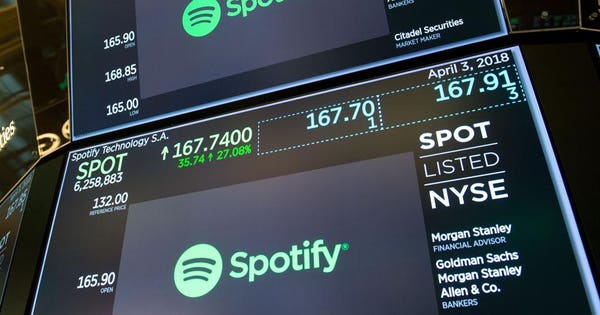 The company has been tolerant of private stock sales to an unusual degree, meaning that Tuesday is not the release valve for shareholders who long felt shackled — that’s expected to temper the sell-off. The direct listing is another opportunity to do what they’ve always been free to do.

In fact, about $500 million in Spotify shares have been traded over the last few weeks in the lead-up to the direct listing, the people familiar with the process say.

Those trades happened at share prices that valued the company between about $22 billion and $25 billion.

That openness to private trades is one of several unique circumstances that allows Spotify to do what other private companies haven’t been able to do. Spotify says it doesn’t need to create and sell new shares to finance the company, which most companies cannot similarly say. It has a huge, popular consumer brand that will appeal to mom-and-pop retail buyers. And the aforementioned stock trades make it easier to estimate how the company will price.

So that’s why some naysayers posit that even if Spotify’s direct listing succeeds, it will not usher in a sea change in how the standard IPO unfolds.

But startups will at least now consider other options — in fact, that’s true even if Spotify’s direct listing isn’t judged by history to be successful.

Companies now know that there is room for restructuring in the IPO, and that’s already a setback for the incumbent, the banking industry.