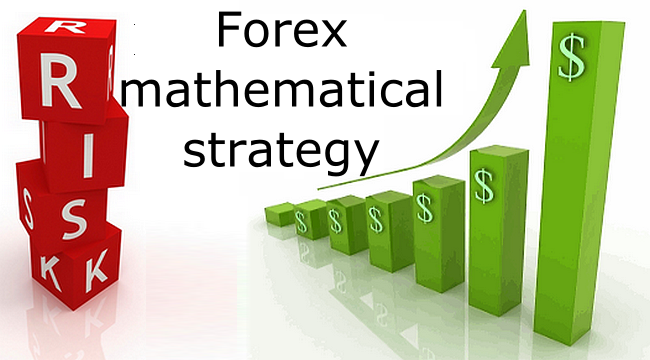 Experienced speculators quite often evaluate the financial markets as random processes and work mainly with probabilities.

Of course, when the novices learn about this, they also try to apply their memories of the higher mathematics course in trading. In result, various mathematical Forex strategies appear.

Unfortunately, these solutions lead to a waste of time at best, or large sums at worst.

The fact is that the “mathematical” systems normally mean the Martingale, which is the most primitive approach to the management of a random process and has nothing to do with complex regression models and statistical calculations.

Therefore, since the novices are interested in this topic from generation to generation, today we will look at the advantages and disadvantages of the Martingale as a system.

First of all, we should recall that this technique came to the financial markets from the casinos, or rather from the gambling houses.

The exact date of its real practical application is not known, but at rough round evaluation, it appeared at the junction of the 18th and 19th centuries, and has gained wide popularity in the 20th century.

In the general case, this is such a strategy in gambling that doubles up after each losing bet until it receives a prize. Thus, the player assumes unlimited risk, but can only win an amount equivalent to the initial bet in the series.

Similar approach has been termed “basic Martingale”, and inexperienced speculators try to apply it on the market.

Judging by the polls on independent forums, the deposit siphon off is often a consequence of the use of the Martingale.

How do banks trade forex?

Of course, many accuse dealing centers (hereafter DC) of unfair work, but, in fact, DCs in this situation are honest as ever, and it’s trader’s own fault. Below we’ll try to consider the basic mistakes of the newly made “mathematicians”.

The most important and fatal delusion of the theorists is to try to move the principle of the “coin” (or red-black) onto the mathematical Forex strategies without amendments and modifications, which is fatally flawed.

To answer the question of why such an approach is unacceptable, we should again turn to history.

Initially, the roulette game had only two fields: black and red; accordingly, from the point of view of the theory of probability, the outcomes of tossing a coin and bets in the casino were completely identical, i.e.

in each test, the probability of success was 50%. The result of this game at a constant bet was the following graph:

To compare the conventional example with trading, the initial deposit has been identified in the amount of $100, and the risk per one bet was limited to $1, i.e.

1% of the deposit. It would seem that it is the grail, because theoretically, even without increasing the bet, it can bring a profit.

But no such luck: the colorless zero was later added to the scale of roulette in gambling establishments, which at a distance neutralized such systems, since the probability of a successful outcome became less than 50%.

Since then, the history of the evolution of the Martingale began, because it has become impossible to stay afloat without an increase in bets. Thus, even if we ignore the zero, in the above example 7 consecutive losses were recorded at one sector, which means that if you double the bet after every failure, we get the following sequence of losses: 1, 2, 4, 8, 16, 32, 64.

In fact, the funds will not be enough even for the opening of the last series.

Where the Martingale shows better results – in the casino or on Forex?

So, if we briefly summarize, two features can be formulated for gambling at roulette: firstly, the probability of winning in a single test is less than 50% due to zero, and secondly, the outcome of each new test does not depend on past results, i.e. autocorrelation is absent, unless the institution uses fraudulent schemes.

Note that the mathematical Forex strategies are subject to these factors at a greater degree – in particular, the role of zero that reduces the probability of winning in the Forex market is played by spread and DC commission, and they are present in every single transaction, regardless of whether it is profitable or unprofitable.

How to make money in forex?

The figure below shows an example of a random process without doubling transactions, the result of experiments of which is adjusted for the potential loss on the commission:

In addition, in most cases, losing trades are countertrend, so a further increase of the lot against the prevailing trend only exacerbates the situation. This situation is a consequence of the above-mentioned autocorrelation, when every new values of the row depend on the preceding, which creates a lot of problems when searching for repetitive signals.

Thus, the Martingale in the financial markets in its pure form is not acceptable.

As already made clear from of the experiments, the idea of using a “basic Martingale” should be dropped immediately, but if you look closely, you’ll find out that this approach can still be used on two occasions, the first of which is addition to the existing system.

Suppose that a trader has some profitable system (you can take any from the “Trading Strategies” section as an example), which provides unambiguous rules for making deals and setting stop-losses, but the expectation of which does not satisfy the speculator.

To solve this problem, mathematical Forex strategies come to the rescue.

In the first stage of the algorithm optimization, it is necessary to collect statistics on working out the signals for the main system over a long period (six months or more).

The average length of a series of losing orders and the longest series of losses are further calculated. In this case, the cost of spreads and commissions should also be considered in the financial result.

At the final step, you need to choose the parameters for risk management, which become relevant as soon as the average series of losses was recorded – for example, if the average probability to fix four consecutive stop-losses in the system is low, then it is reasonable to increase the volume after three losing orders in the new deal.

At that, multicoefficient does not have to be a double, it is permissible to use more conservative options as well. 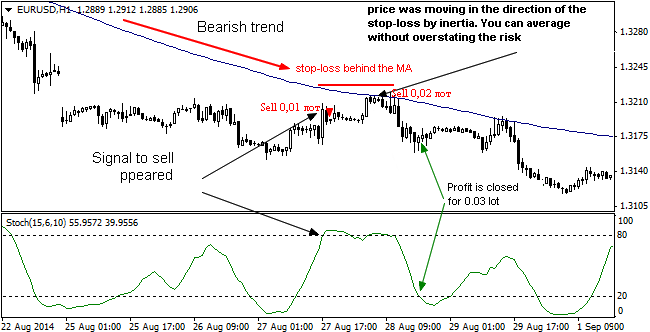 The figure above shows a second variant of application of the Martingale, i.e. averaging in the area of the signal appearance. In this case, it is assumed that the first order is opened by the minimum volume, after which the deal volume is incremented as the price moves against the position.

In this case, the stop-loss is set simultaneously with the first order, and the risk of an aggregate position (including averages) should not violate the rules of money management.

In all other cases, topping the lot with the multiplication would result in the account siphon off and can’t be called full-fledged strategies. Source:Dewinforex