How To Trade Ethereum 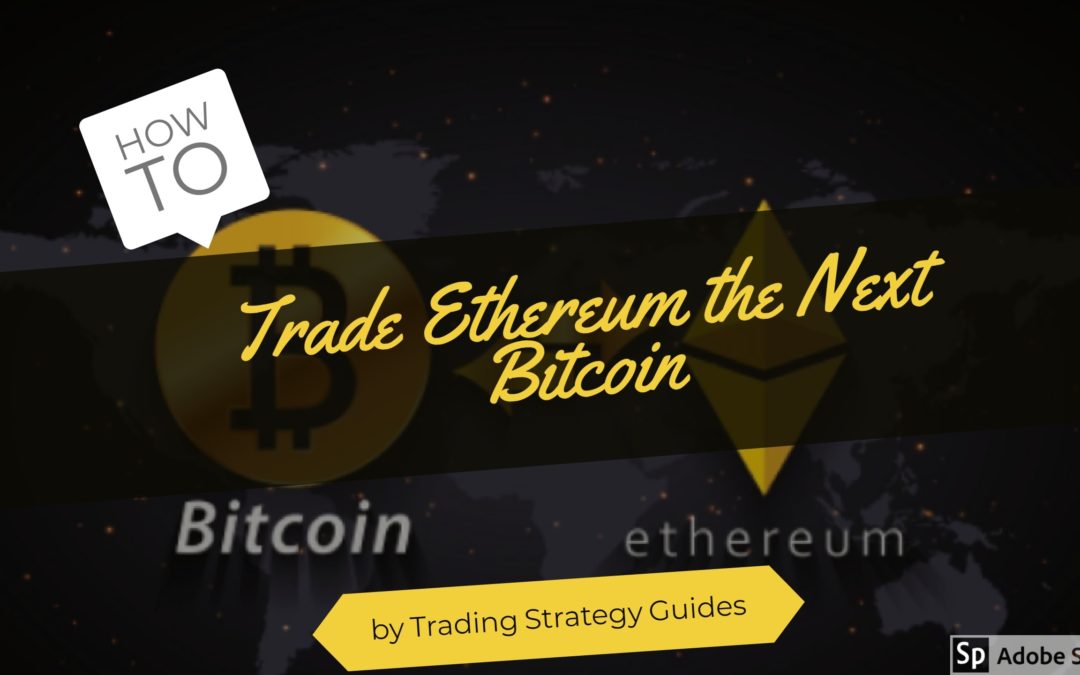 For the new Cryptocurrency trader, you may be asking how to trade Ethereum?

Indeed, many will also be asking what Ethereum is?

You can be forgiven for being slightly confused.

When many people think of cryptocurrency, Bitcoin is the first thing that usually comes to mind. However, Ether is fast on the heels of the currency.

Indeed, Ether has being positioned as the dominant “alt-coin” (alternative coin to Bitcoin). If the price is anything to go by, then traders are indeed justified in wanting to get involved.

Ether was raised in an initial crowdfunding with a price of the equivalent of only $0.3. At today’s price of just above $190, it is anybody’s guess as to where it will go.

If Bitcoin is any guide, Ether has a lot of space to grow.

Before we can answer the question of how to trade Ethereum, we have to ask what it is and how it differs from Bitcoin.

Placing this in less technical guise, Ethereum is an open software platform that is based on a blockchain which enables developers to build and deploy decentralized applications.

These applications work on “smart contracts”.

Within this Ethereum universe, developers and “miners” are paid in a cryptocurrency called Ether (ETH).

This means that as a cryptocurrency it is an authenticated record of a transaction. In this case, the transaction is paying developers for services rendered.

Like Bitcoin, Ether can also be “mined” by computers which authenticate the transactions.

However, ETH has now taken on a life of itself outside of the Ethereum concept where traders are fascinated with the growth potential. For many traders who are getting started in Cryptocurrency, they may be mistaken to believe that Ether is exactly the same as Bitcoin. This is not really the case.

How to Trade Ethereum

There are a number of distinct differences between the two. We went over how to trade Bitcoin separately recently.

The differences are highly technical but we can go over the results of the technical differences in the most succinct way possible. 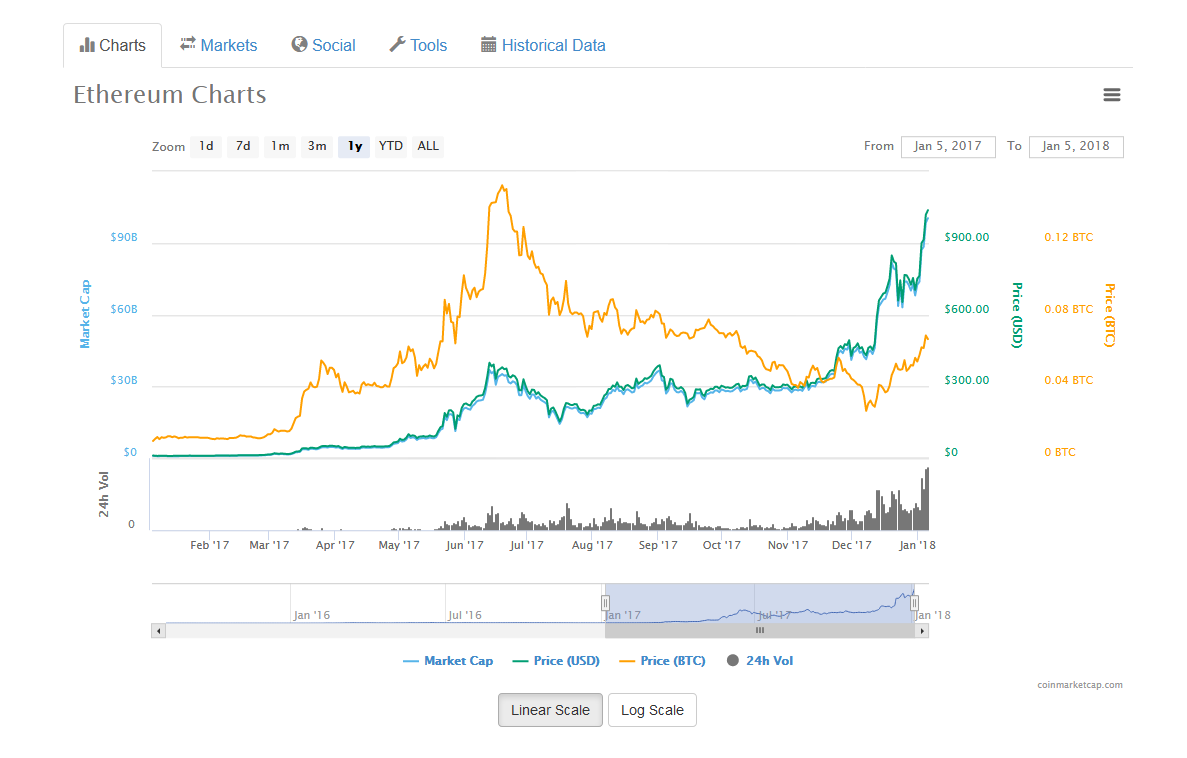 There is no in built limitation in supply whereas there will only ever be 21 million Bitcoins mined.

This means that most of the owners of Bitcoin were the early miners.

Although these differences may seem relatively simple, they do have a large impact on the future prospects of Ethereum and hence its price. Indeed, if many of the early adopters of Bitcoin decide to move to Ether, this could greatly impact on demand.

Ether, like all other cryptocurrencies, is decentralised and is not controlled by a single issuing authority.

This means that unlike traditional Fiat currency, Ether is not affected directly by any movements in Economic numbers or central bank rates.

Hence, the Ether trader will keep a keen eye on the supply and demand fundamentals of Ether.

These will have a large impact on the price of ETH.

As mentioned, Ether is mined by computers as they are rewarded for contributing to the security of the network.

What this means is that the computer miners solve complicated mathematical problems and are hence rewarded with Ether for completing this task.

How to Trade Ethereum the Next Bitcoin

They are rewarded for these so called “proof of works”.

What the Ether trader needs to know about this mining is at what rate it impacts on the production and supply of Ether into the market.

Under the proof of work protocol, Ether production was limited to 18m ETH produced every year. This means that supply was rather steady and the Miners who solve the most will get rewarded the most ETH.

However, this is set to change later in 2017 as the Ethereum foundation starts to release a hybrid Proof of Work (POW) and Proof of Stake (POS) mining.

The switch was done in order reduce the use of electricity and resources when mining Ether on the open network.

This Hybrid between POS and POW will be called as Casper.

We won’t go into the actual specifics but many people are of the view that this Hybrid system will slow the supply of Ether to the market. This will mean that scarcity of Ether will increase and the value of ETH will increase substantially.

Ether traders should keep up to date with the latest developments from the Ether foundation as they roll out at POS hybrid towards the end of 2017.

On the other side of the equation, we have the demand for holding Ether.

There are two aspect factors driving demand for Ether. These are transactional and investment demand.

On the transactional side, the fundamental purpose of Ether is for developers to be able to create applications that run on the Ethereum network.

Ether is the currency which allows the decentralized applications (Dapps) to be developed.

Hence, as more and more developers look to create applications that make use of the smart contract system, the more Ether will be needed to fund the projects.

Indeed, the Ether trader can keep an eye on the number of applications being developed on the Ethereum block chain at dapps.ethercasts.com.

Although most crypto online payment processors are still using Bitcoin as the currency of choice, Ether is catching up quickly.

Indeed. One can see that the demand for ether has increased substantially as Japan allowed for customers to pay in digital currencies including ether.

However, one of the most prevalent demands for Ether appears to be its investment demand. Many traders want to hold an asset that appears to have inherent scarcity.

Many investors took part in the initial crowd funding of Ether in 2014 and many more are buying ETH on large exchanges such as Coinbase and Bitstamp.

For the Ether investor, keeping track of investment demand is essential.

Hence, the trader should monitor such online sources as Google trends to get an idea of the investment demand.

In the above image, we have the search interest in “buy Ether” on Google.

This shows the rapid rise in queries in the last month alone.

Although Ether is a cryptocurrency, this does not mean that it is not impacted by the same technical factors which influence more general Fiat currencies.

Technical analysis is based on the study of charts and previous data under the assumption that they tend to repeat themselves.

This is also based on the study of behavioral finance where other trader’s thinking could have an impact on your strategy.

Indeed, when such a large demand exists for Ether from investors currently, the market is susceptible to a positive feedback and “herding” behaviour.

Technical analysis is an entire subject itself with numerous different strategies that are sometimes a combination of individual indicators. 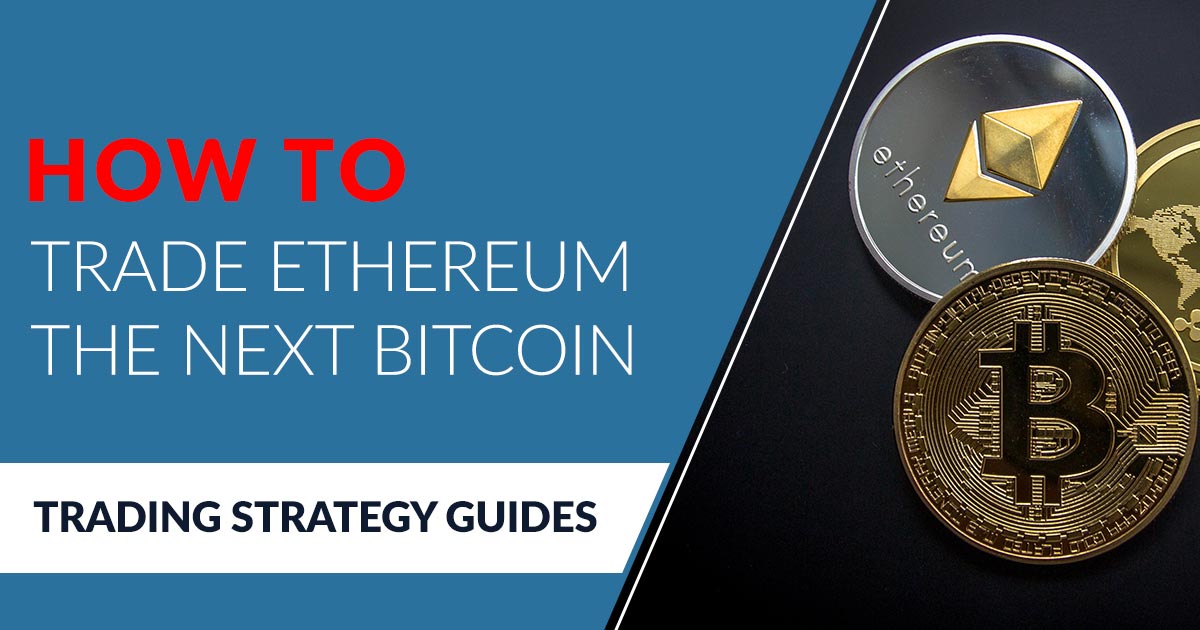 We will go over some of the best technical indicators for Ether trading.

When it comes to technical trading, one of the most important indicators is volume. It gives an idea of how many traders are entering the market and the general interest either way in the security.

With volume, an indicator that you may be interested in following is the On-Balance Volume (OBV). This measures the positive and negative flow of volume in a security relative to the price.

Given that it includes price, this expands on the simple volume measure and can provide us with much more information.

The underlying assumption behind the OBV indicator is that volume precedes price. Hence, if Ether is seeing an increasing OBV it is a signal that volume is increasing on an upward price trend.

On the other side, a decreasing OBV means that Ether is seeing increasing volume as it goes through a falling price.

So, for example, if a trader sees that the OBV is increasing but the price is still relatively flat, it is likely to start increasing as well.

On the other hand, if the price is rising and the OBV is rather flat or trending down, this could be an indication the price may reverse soon.

How to Trade Ethereum on Kraken?

However, if the price is falling and the OBV is flat-lining or rising this could be an indication it would be near a turning point.

The astute trader would have noticed this and come to the conclusion that Ether was headed for a correction and a turning point.

What is the best overnight shipping option for ebay sellers

Indeed, if the trader had entered a short position in Ether on the 24 of May, he would have generated a hefty return.

Another important technical indicator that can be used when trading Ether is the Stochastic Oscillator. This indicator was developed in the 1950s and is a momentum indicator.

What the Stochastic Oscillator shows is the location of the close relative to the high-low range over a certain number of periods.

What is Crypto Trading?

It follows the speed or the momentum of price.

Give that the Stochastic Oscillator trades between a certain range, it is often times used as an indicator of overbought and oversold levels. This is important as it allows the Ether trader to determine whether a reversal is at all likely.

The Oscillator is between 0 and 100 but the levels that are considered important are below 20 or above 80.

This are the oversold and overbought levels respectively.

It must also be used in conjunction with other technical indicators when trading Ethereum.

This is because there can be times when Ether can remain overbought or oversold for an extended period of time with no reversal evident at first.

Taking a look at the below chart of Ether, we can see that Ether was in an oversold position after the recent fall. This remained there for a few hours and could have been an indicator that the price was due for a reversal.

Indeed, on the 26 May, Ether reversed its slide and the trader could have made a profit and entered Ether at the $130 level.

The Ether trader could also use the Stochastic Oscillator as an indicator of a potential bullish / bearish divergence.

A bullish divergence occurs when the price records a lower low but the Stochastic Oscillator forms a higher low. This demonstrates less downside momentum and a potential reversal is imminent.

Similarly, a bearish divergence occurs when the price records a higher high but the oscillator appears to be forming a lower high.

How to Trade Ethereum the Next Bitcoin

The trader could think that Ether is about to turn in price.

Now that you have learned how to trade Ethereum, you need to find the right broker to invest with.

This can indeed be quite difficult given the number of choices and potential pitfalls.

We at FXaxe have collected a list of trusted brokers and rated them based on our experience of a number of factors.

Before investing with any of these brokers, you should create a demo account to get a better understanding of how the platform works as well as whether you find it user friendly.

Then, when you are ready to invest, you should set aside an amount that is large enough to avoid inevitable volatility but should be within your financial means.