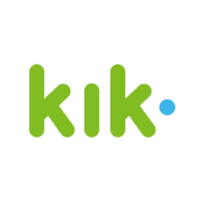 Short Answer: Yes. But only as a speculative investment.

So KIK messenger will be launching an ICO for it's new coin KIN in the coming week. With all the hype over ICO's this year and the millions spent on SOTRJ, ARAGON (just to name a few) I can't help but feel dubious about the actual value of these products and if I am throwing good Ether down the drain buying into these tokens...

The KIN token will be based on the Ethereum blockchain as an ECR20 token (meaning it will store in your Ethereum wallet).

What I think gives this token a second look is the mass use of the KIK messenger service.

It's not decentralised at all, but it definitely has a huge following amongst a unique demographic (including sex workers from what I have been told). KIK is easy to sign up for, and doesn't require an email address or a phone number like most of the other messaging services on phones these days.

The privacy feature of KIK has made it a popular service and this is the key to KIN.

The only reason KIN will do well is because of the huge user base of KIK messenger.

Integrating an easy payment system into the messaging app is a huge step forward. I am aware of actual projects in the works who are trying to build a decentralised messaging system with their own payment token, but with all social media projects it's about the network effect and adoption.

So yes, I will be buying a few tokens.

I don't think that they will go crazy and shoot to the moon, but I like what they are going for. KIN may actually succeed due to it's first-mover advantage and its network adoption.